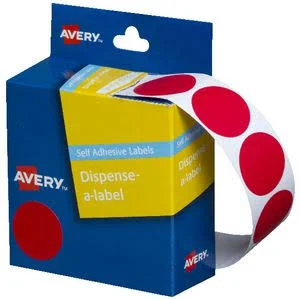 Yep. Basically you stick a small red dot on to pretty well everything you have in the van. From all that stuff in the en-suite via the kitchen to the bedroom. And don’t forget all those items under the bed and lounge areas either as well as the tunnel boot and car of course!

You can write the date on them if you like but if it’s something you genuinely use ‘a lot’ such as a pie maker in the kitchen no problem. Take the sticker off after a couple of uses – but ideally leave it on for at least a month or two.

So if that ‘nice idea’ to get a pie-maker (or whatever) a while back still has the red sticker on it after (say) 6-8 months… consider getting rid of it.

Same goes for clothes, tools and all those ‘just in case’ things we all seem to collect.


EXAMPLES:
Personal Stuff…
I love stargazing so I packed my star-finder, compass and accompanying ‘how to’ book as well as a set of binoculars. In 14months full-time travelling I have never used it & only once used the binoculars ☹. It doesn’t weigh that much in the scheme of things but everything soon adds up. Stow or throw?

Bedding & Clothing:
If like us you’re chasing warm weather, do we really need two blankets & two bed covers? There are some really good 12v & 240v electric blankets on the market that are light & practical & can also be used as top blankets rather than just bed warmers.

Initially we thought it would be convenient to have at least the old ‘1 on, 1 off and 1 in the wash’ minimum of clothing, we soon realized that in fact just ‘1 on, 1 in the wash’ works out fine… for most things. 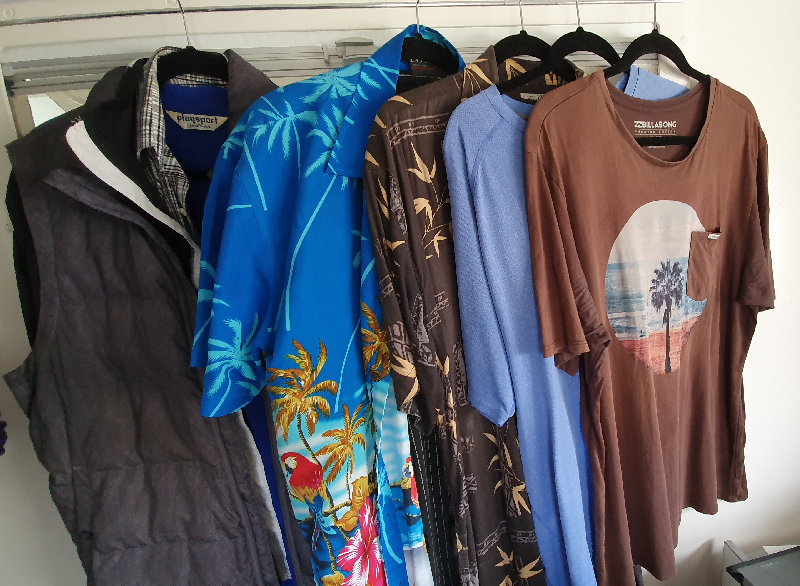 Do I REALLY  need those two fancy ‘dress’ shirts. And a dressing gown?... C’MON!!... And what on earth was I thinking bringing a semi ‘formal’ jacket, 2 ties and 6 pairs of socks and ‘nice leather shoes’!!

I have NOT worn any socks since travelling and worn the fancy shirt once.
The tie might come in handy if I need to strap something down though! (joke!)

Likewise 2 pairs of jeans. Do I REALLY  need two pairs. Shorts – 4 pairs!! Ok… being realistic at least 3 or 4 pairs of undies and the same with t-shirts. After all it can get hot and sweaty on the road so we need to stay ‘fresh’ right?

Same for the ladies – but how many bras do you really need eh?? ?
And what about all that jewellery, make up, hair styling stuff? … hmmm.

Tools:
I’m not a ‘handyman’ by any stretch of the imagination but I had some spare tools ‘just in case’. Needing some extra space for ‘something else’ recently I looked at them and thought… “I’ve never used these once in our time (14months) on the road.” – so I gave them away. 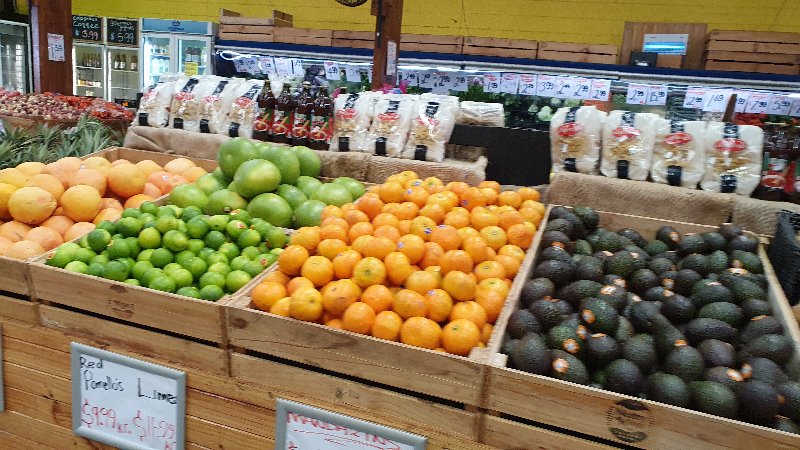 Well where to start? – The main problem with living on the road is there is much less space than say your average suburban house. And while most people prefer to go shopping once a week at the most – two at best – the reality in a caravan is we just don’t have the same storage space. So buying 6 cans of baked beans just because they are on special and have long ‘Best Before’ dates might make financial sense, it doesn’t help the weight factor if you’re on the move every week or so.

The compromise then is to go shopping every few days just to top up the basics. Notice I said TOP-UP… not STOCK-UP! ? – Also frozen goods. Most caravan fridges are comparatively small compared to ‘normal’ house fridges, especially the freezer. We bought ourselves a separate Waeco CFX fridge freezer. Good choice for extra storage – not so good for the weight of the unit itself plus its contents!!

Dinner plates – how many do you really need and are there lighter alternatives? We were surprised how much standard plates & bowls actually weigh. It seems some people just use paper plates so they don’t waste water washing up and simply put used plates on their fire!  - Sounds like a good idea… 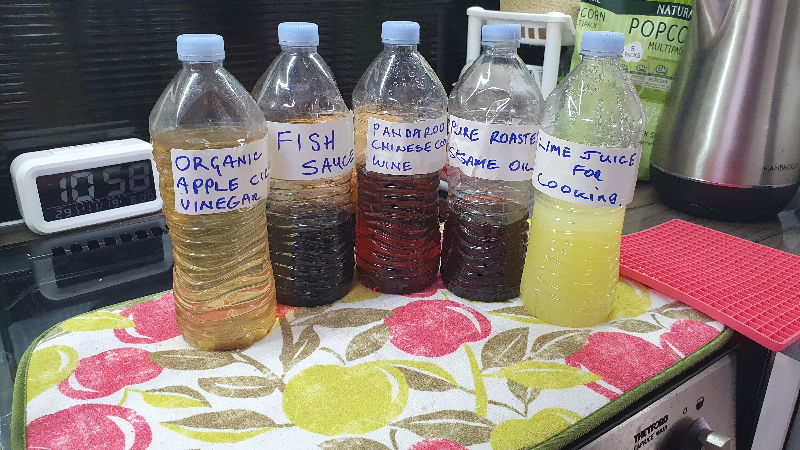 And all those glass bottles!!... Bottles of oil, sauces, marinades… the weight soon adds up!

So we’ve decanted most of them into plastic water bottles. Basically bought a carton of 500ml plastic drinking water. Drank the water over time then re-used the plastic bottles and put labels on them like ‘Soy Sauce’ – ‘Extra Virgin Olive Oil’ etc… While not huge we were surprised how much weight we saved even with even just 6 or 7 items.

Oh… and how many frying pans, plates, cutlery, cups etc do we really need?

Cryovac:
Now THIS is a long term weight & space saver option. I was a bit sceptical when Kaye initially packed it.  But you soon realise so many products in tins contain ‘extra water’ whether as a preservative or sauce etc. 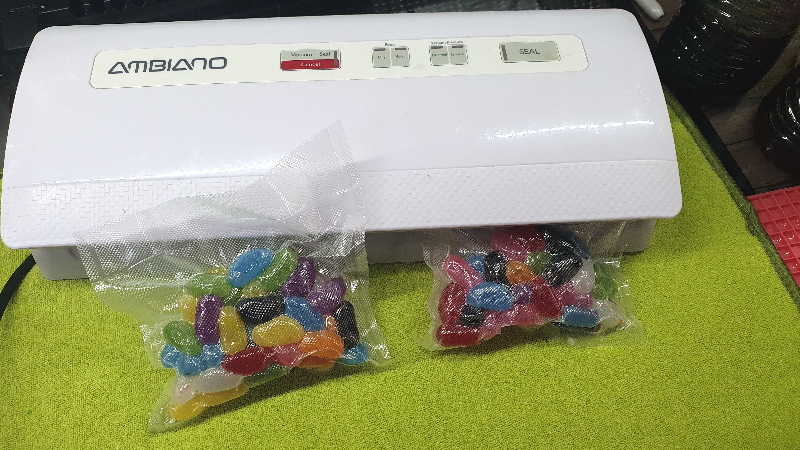 By emptying the contents into a plastic Cryovac bag and minimizing the amount of water in most items, then sealing the bag, you’d be surprised how much overall weight is saved. We wrote the ‘best before’ dates on each one just to be sure.

And as for drinks? Well… We often joke “we’re doing the Zig-Zag tour of Australia via Dan Murphy’s” – so that probably means we’re not going to do a lot of off-road exploring for now… but if you do, how much is too much?

And even if you don’t drink any alcohol, just keep in mind that every litre of water weighs a kilo.

So whether you love Apple juice, Ginger beer or just good ‘ol H2O – it all adds up in overall weight. And that includes any grey water tanks you might have!

We like to try and keep weight in our van - & car – fairly consistent. It’s so easy to just add stuff and not even think twice about it. In fact we’ve created our own spreadsheet for this very reason – to give us a heads up on how much is too much. We add ‘new’ things and remove stuff we’ve used or thrown out. It can be quite surprising at times!

So apart from the many mobile weighing services available, there are also lots of public weighbridges to do a quick overall check of your load – aka GCM or Gross Combined Mass.

Doesn’t matter if you do or don’t get a ‘certified’ print-out. The whole idea is YOU have an idea of what’s what weight wise and can then decide ‘How Much Is Too Much!’ – after all it’s all about safety and being legal as we travel this great country of ours.