Valentine? Wear Your Heart On Your Sleeve But Hide The Chocolate In The Fridge!

“Roses are red, violets are blue... Skip the chocolate and roses…buy me catnip or liver instead!”

Pretty well most of us really love the romance associated with Valentines Day…we just know that right around the world, there are Vets and nurses gearing up to spend a less than fun-filled time, cleaning up vomit and poos around that time…

Of course nobody in their right mind would feed a pet chocolate these days right?...

Unless they’re the modern day equivalent of Tom Hanks in ‘Castaway’ (i.e. no access to any information whatsoever) because everyone knows chocolate contains Theobromine which is poisonous for pets… and the darker the chocolate the more dangerous.

So, no, this year humans are off the hook because we can reveal the real culprit in most canine cases of chocolate toxicity: the ‘Olfactory Cortex’.

Now before you get excited, this isn’t some fancy discount outlet… It’s the part of the brain responsible for sorting out smells – and in dogs – it’s a whopping 40 times the size of the same teensy Olfactory Cortex in humans. 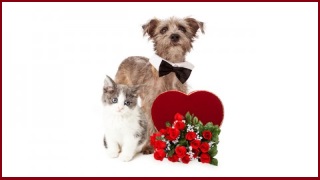 Dogs 'LIVE' to smell. They can sniff via each nostril independently plus they have an extra smelling section called the Vomeronasal organ, above the roof of the mouth which helps them identify not only other animals and people, but what they’ve been doing or eating.

Dogs will always win the game of hide n’ seek … so don’t tempt them.

One Easter some years ago our nephew came to visit with ‘gifts’ from the family. Alas, he left his suitcase on the floor and 3 clever Poodles and 1 Bichon prised the case open, dug out the Easter eggs from under his clothes and had a feast… leaving the foil wrappers behind!

But don't be fooled... it's not totally ok though as they were white chocolate and pancreatitis is a potential concern.

So that leads us to the Florist Association’s biggest day of the year selling romantic bouquets of roses or mixed blooms.

Now I don’t know anyone who doesn’t like to receive flowers, male or female, but once you have pets, certain plants need to be excluded because just a tiny nibble by a curious cat, or dog, could prove fatal.

Lillies. They look great, smell fantastic however a cat chewing just one or two leaves or petals can suffer acute kidney failure. The worst of the Lilly family: Tiger, Asiatic, Stargazer, Day and Easter lilies.

Don’t let them drink the water from the vase, either. It’s toxic too.
Last but not least… Vets are advising us of another potentially dangerous Valentine’s Day Gifts… helium balloons on string.

Cats adore string (from the balloons) which can wrap around a cat’s tongue or become stuck in his/her intestines – yep – surgery will be needed.

Bottom line? Buy some catnip or a toy mouse for your cat and some safe, Aussie made treats for your dog… all the while remembering all dogs have the tools of a Sherlock Holmes and if not locked away, they WILL find your c-h-o-c-o-l-a-t-e and eat it.

Just like Ksubi – the 'eat anything' fanatic – who wrongly thought he’d struck the jackpot when he raided a bathroom bin then shortly after some grapes!!

IMPORTANT REMINDER:
If you are in ANY doubt that your pet has eaten something it shouldn't call your regular veterinarian or emergency centre ASAP - don't delay!