Do you sleep with your pet? Research shows vast numbers of us do and we laugh off the idea that their shifting, shaking, scratching and middle-of-the-night-toileting might have any effect on us.

A study from Johns Hopkins Medicine suggests that having our sleep interrupted is just as bad for us as not getting enough sleep in the first place.

The team of researchers used a pool of 62 healthy men and women to examine how sleep patterns affected the body.

These crazy volunteers were randomly assigned to one of 3 groups and then monitored over three nights of uninterrupted sleep, forced awakenings or delayed bedtimes.

Surprise, surprise… by the second night, those who had been forced to wake up were in a much worse mood than those who had gone to bed late! 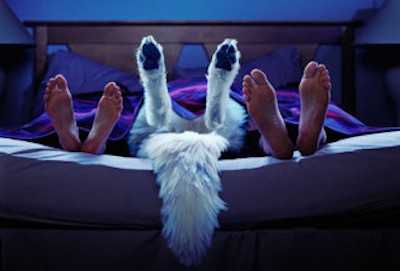 The study’s lead author Patrick Finan says "When your sleep is disrupted throughout the night, you don't have the opportunity to progress through the sleep stages to get the amount of slow-wave sleep that is key to the feeling of restoration."

It gets worse. Those who’d been forced to wake up eight times during the night reported a drop in mood of 31%, on average.

Finan and his team aren’t in the business of deliberately making people feel grumpy (although they succeeded) their hope is this research will open up new treatments for long-term insomnia, which is associated with a depressed mood.

Ask any new parent or on-call medical staff how frequent awakenings make them feel (!) but it’s the longer term impacts on our body that aren’t yet fully understood.

So researchers looked at brain waves, oxygen levels, heart rate, breathing patterns and even leg movements to try and work out what's going on while we're dozing.

They found those who were constantly getting up from bed had shorter periods of deep, slow-wave sleep, as you would expect.

Plus, they were able to measure a comparable reduction in energy levels as well as a reduction in feelings of sympathy and friendliness. (Hands up if this sounds like when you had a newborn needing feeding at all hours!)

However this study noticed what others hadn’t… there’s actually a cumulative effect on disrupted sleep. Ie, after a second night of interrupted sleep the third night was even worse.

So… how’s that crate training going?????