BLOG: Our Story! with Kaye & Brian

Given our working life has been radio & television production over way too many years to mention here, part of our role then - and today - is to ask people... "so tell us your story? - what stands out in YOUR life?"

And the expectation of course is we'll hear all kinds of often strange but true stories if - and ONLY if - the time is right to tell those stories.

But when it comes to telling your own story we can see how some people might just be a little ummm - 'reluctant' or maybe embarrassed to tell all. Sometimes it's because they are shy.

Maybe it sounds like you're bragging about something or perhaps because it's not necessarily the happiest of stories or maybe people think 'I have nothing worthwhile to tell'.

Well first of all EVERYONE has a story to tell. Big small or somewhere in between. And we don't have to 'tell all'.

Some things are often better left private! - So on that note we're going to try and tell our story too. Mostly the good but more importantly to try and give you an idea of what you can say and how to share your story with family & friends.

So just to be clear this is the story of Kaye & Brian - how we met, some of the things we've done together and what we'd like to do now and into the future.

Radio Was Our Connection! 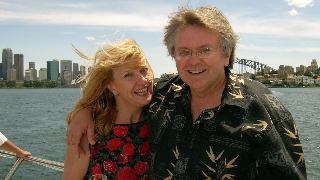 At the time, little did either of us know that the launch of a brand new radio station would eventually see us becoming a 'couple' !

Both of us had previous commercial radio/TV experience so joining a brand new radio station was a 'no-brainer' albeit pretty exciting! The possibilities and opportunities seemed endless.

Originally a Kiwi journo (she's now a 'dinky-di Aussie'!) Kaye was offered a role in the newsroom due to her previous TV news-reader/journalist role in NZ & later Bendigo and I joined having spent the past couple of years as Creative Director at a then 'failing' 2GB Radio in Sydney - and no my role was not guiding that station in its talk radio role - rather all about commercial ad production!

So Kaye was one of two 4MMM newsreaders and I was in charge of the commercial production department.

We all met a few months earlier before the launch but as we were all so busy getting our respective roles to work on a daily basis, thought nothing more about the new people we were working with.

Such an appropriate song in so many ways! For the few weeks leading up to the launch mostly old Beatles and other classic album tracks were played through the day to test out transmission & other technical facilities etc. The format was going to be quite different to the stock standard AM stations of the day.

That song - Cool Change - was the very first after the launch speeches and quite significant in that it changed the way music would be heard in Brisbane BUT... it opened my eyes to this rather gorgeous girl in the newsroom called Kaye.

For the record I was married at the time although recently separated.

So for me - Brian - the 'Cool Change' idea meant that there was the possibility of life after all the drama that had ensued in the previous few years.

As a commercial radio producer I needed a variety of voices. Kaye had - and still does have - that golden sound we all love to hear. She does it naturally. Never puts it on and those dulcet tones just sing to me every time she speaks - (even if annoyed at me from time to time today!!) :-)

So one day while I was 'trying her out' as a voice-over person. We got chatting and for some reason I told her I was separated but had some kids but would she like to maybe go and have a coffee some time (Whoa! - classic pick up line eh??)

She somehow managed to say 'thanks but no thanks' at the same time without offending me so I guess I thought I was still in with a chance!

Of course over the next 12 months the station had its share of social events. Christmas, first year on air - that sort of thing.

I noticed Kaye didn't seem to have a boyfriend even though there were plenty of 'jocks' (DJ's / announcers) eyeing her up and down a lot!

We spent a fair bit of time chatting about nothing in that time - usually at the coffee machine, but nothing too serious. She had in fact met my kids when I brought them into the station to 'see where daddy works'.

I even managed to borrow her car occasionally as I had none at the time. An old Viscount push button automatic!!

But still no sign of any real commitment other than 'we liked each other'.

So I figured she was just taking her time and being 'selective'.... Then BINGO! - One day I finally got my chance!

Our studios were on the 4th floor in Spring Hill Brisbane. One afternoon Kaye & I happened to catch the lift together - totally unplanned. The doors closed. I figured now or never!.... so I said.. "you know what?.... I really like you - a lot!" and with that I moved a bit closer and gave her a kiss on the cheek.

As you might imagine she turned a few shades of pink - beautiful :-) And that was it. That was the start of our life together!

I even wrote a song about it:

Song For Kaye:
"First time I met you I couldn't get you out of my mind for a day
I had it in mind to, get to know you and I saw that you had it too
You ummed and you ahhhed, lent me your car silly girl
You didn't know that by then I was in love with you...

I stole a kiss in the elevator you went all shy that is true
I tried to organise a time when, we would go out as one
You ummed and you ahhhed you lent me your car silly girl
You didn't know that by then I was in love with you...

Of course if I were to do that sort of thing today I'd be up for some kind of harassment charge no doubt!

Anyway my 'smooth move' obviously changed her mind about the young 'married bloke with kids' and we finally started seeing each other outside of work.

We started going out to various concerts etc and basically did what new lovers do - love each other... and we still do to this day! :-)