While neither of us are what you might call 'ambulance chasers' but with our collective mainstream media background, we're both very aware that the sound of a siren - particularly if approaching close by then stopping - can mean some kind of 'drama' is unfolding.

And this is exactly what happened while we were at the Stockton Beach Holiday Park in late September.

We'd gone up to Stockton (Newcastle NSW) for a week to catch up with some family and attend an event called 'WoodStockton' a one day music & food festival held at the local bowling club. 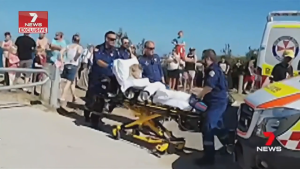 *** SCROLL DOWN FOR EXCLUSIVE NEWS VIDEO!***

Our caravan was parked close to the famous Stockton breakwater and we'd already had a few walks at night and during the day taking in all the amazing scenery on offer.

We were expecting guests in the afternoon so basically decided to 'chill' just before lunch and relax outside.

But once those sirens started blaring and got closer and closer instinct kicked in and Brian grabbed his camera and ran (well he can't run much any more but he walked quickly!) the 50mtrs or so to see what was happening.

Basically, a young boy had been walking along the breakwater near some steps down to the beach with his brother & sister.

A brown snake had slithered out from the steps and made its way across their feet.  Surprisingly this didn't seem to startle the kids but unfortunately one of them was bitten by the snake.

For some reason the bite didn't seem too bad -  a bit like a scratch apparently and they all continued walking along the breakwater. 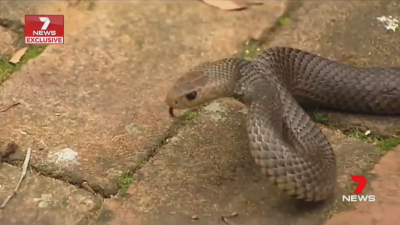 And that's when the emergency started as the young boy collapsed while walking. Luckily a local fisherman knew what to do and applied a torniquet to the boys leg and immediately called Triple-0.

Meantime as a second ambulance arrived, so did the Police followed a short time later by a helicopter.

Brian was making sure to capture all the action on his phone including a short interview with the grandmother of the boy and the Head Ambulance guy.

Long story short - We thought this was interesting/exciting enough for a news story so Kaye called one of her buddies at Ch7 News. Yes they were VERY interested so we uploaded all the material to see what they thought of it.

The result was this video - a Saturday night 'lead story' no less. Thanks to CH7 News and also to the family of the young boy who has now fully recovered from the snake bite.