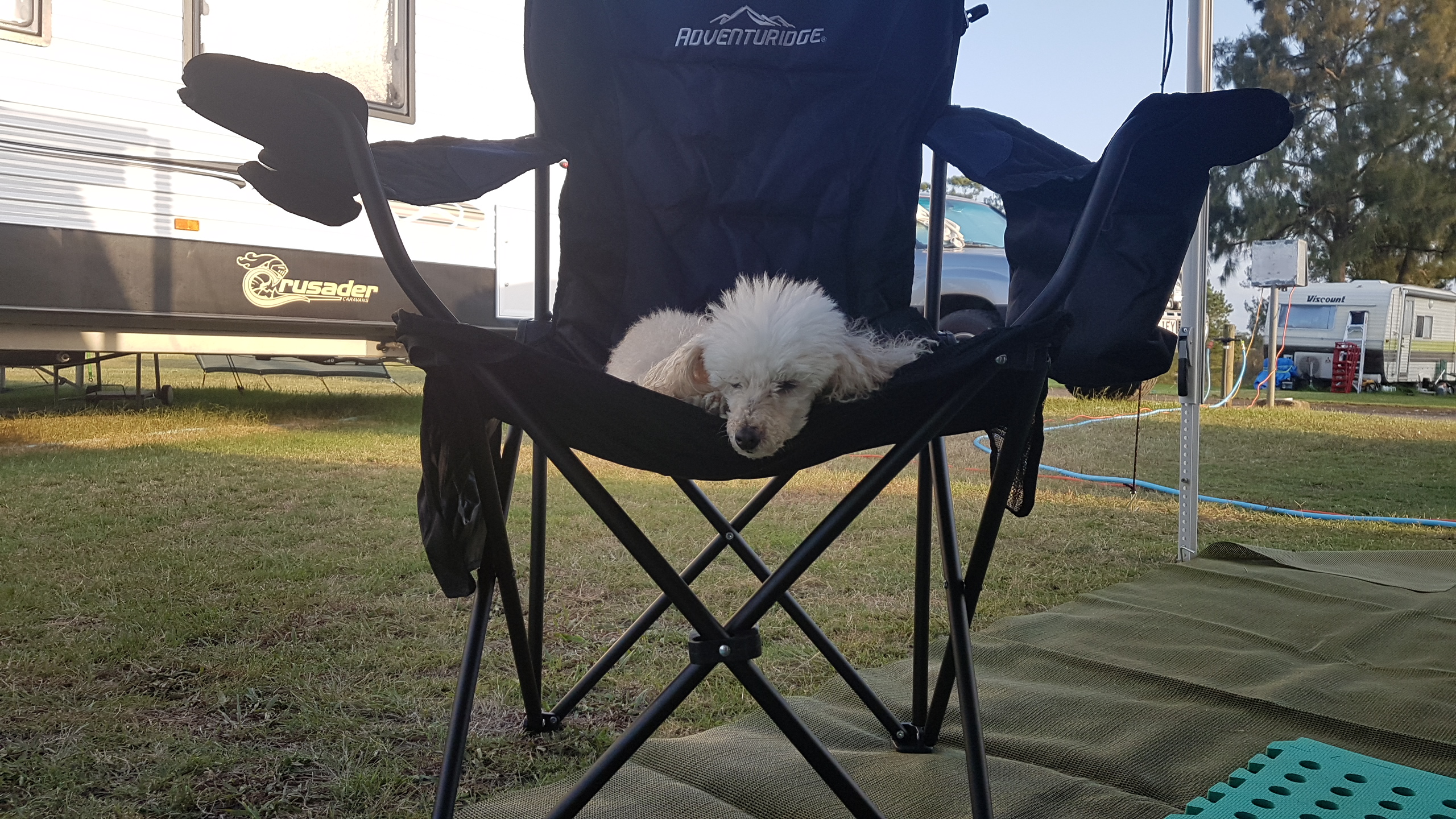 But what's different about this trip is we are now the proud owners of an Aussie built New Age Oz Classic 20, complete with a club lounge, full kitchen with gas/electric stove, microwave, a fridge that can switch between gas, 240v & 12v, washing machine, toilet and shower. Talk about well equipped! There are bigger vans. There are smaller. But this is perfect for two people and a toy poodle.

Yes Chica (photo right) has and will be joining us for our adventures.

GETTING TO KNOW YOU!
Our caravan was delivered to us at the end of October 2017 because we still had to buy a 'tow'.
So we spent a few nights in the van in the driveway playing / sleeping / showering etc to get a feel for our not so small investment. 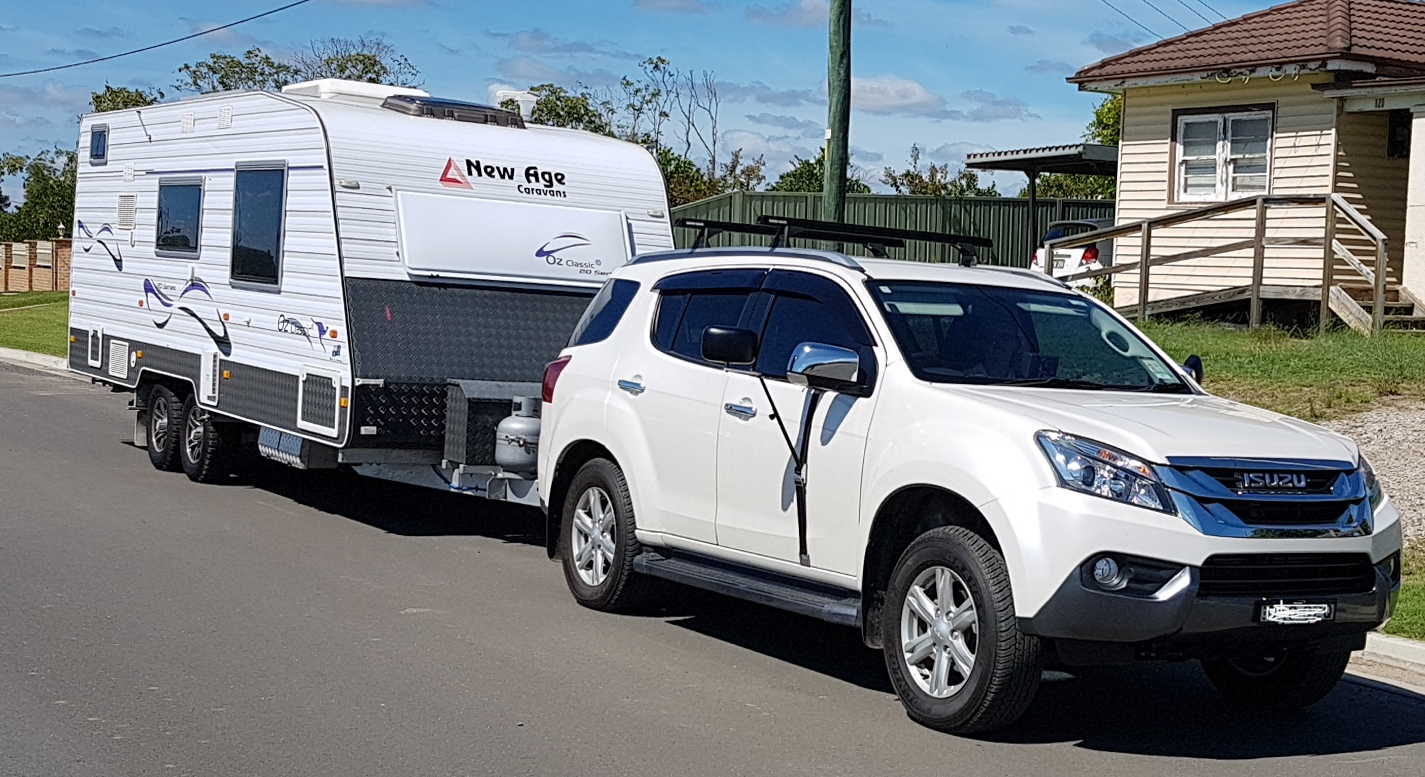 About a month later we took delivery of an Isuzu M-UX apparently stands for 'Make-U-Excited' - And it does!

But driving what is basically a small truck was quite different to our very old but reliable Subaru Outback so we decided not to even think about towing almost 3 tonne until we'd mastered the new 'beast' - by then it was almost Christmas and as has happened before, the (now grownup) kids decided to join us.

Perfect! Given the limited space in our old house, daughter Caroline & her partner Ian were excited to have been allocated the caravan for their stay of just over 2 weeks. More 'off-road' testing.

Finally Christmas/New Year came and went. Whew - :-) ... at last we can start to so some serious planning.

Monday JANUARY 29th 2018.
As our online & media work took an upward spiral the first few weeks of the month, getting away was still 'just a dream'. Finally though, we plucked up the courage to hitch it all up and see how she travelled.

Well to be honest to see if Brian remembered how to actually tow something so big!

We planned the first test drive literally around the block. A distance of about 7.5Km "which we did twice 'cos it was so much fun!!... so WOW a whole 15Km already!

Back home - A glass of bubbles and immediately made a booking for Percy's Place (which we had visited without the van before Christmas) for two nights maybe three.

Wednesday JANUARY 31st 2018.
Even though we had a late night getting things 'packed & ready' we were still up pretty early to pack the van and get on the road.

We weighed the van tow-ball and 'bingo' right on 180Kg on the tow ball as per the manual.

Brian backed the M-UX in like a pro, hitched everything up and after going through the safety checklist we were away!

The most surprising thing for us both was how easy it seemed... well at first. Nervous?... a little. After all there's a lot of $'s at stake with a new to us caravan and towing vehicle let alone our own safety and Chica's the cheeky toy poodle of course. So the trip out to Pitt Town where Percy's Place is located was 'steady'.

Arriving just before 11am it all seemed like a dream! No drama on the road and access to Percy's is a doddle even for novices!

Owner Rachel gave us a 'drive thru' spot to make things even easier. Even though we have our own toilet & shower we were close to the amenities should we need them.

Weather was cool, if a little windy but best of all we were here at last!

SETTING UP... ALWAYS SOMETHING TO LEARN!
Having played around with the van quite a bit before ever venturing out we were pretty confident of what we were doing.
+ Connect the water with the blue drinking water hose. Check!
+ Connect the 240v power and confirm the refrigerator is on. Check!
+ Lay out the grey water hose (shower/sink etc) to help 'water' the local grounds - all good. Check! 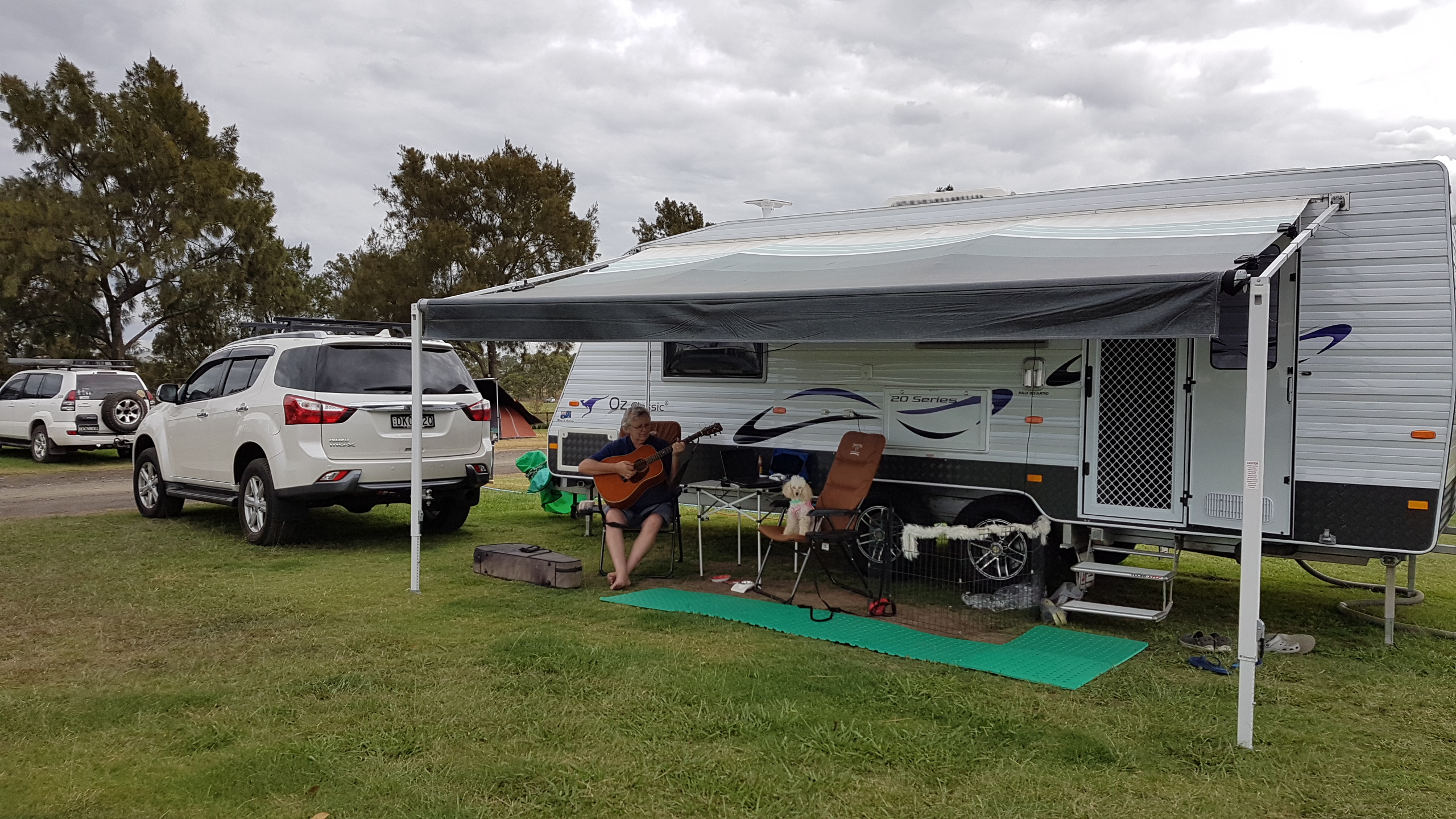 Now for the awning.

We had opened and closed and played with this a couple of times prior to this trip. So easy and all worked fine.

But as any actor knows - if something is going to go wrong it probably will... especially on opening night!

We still can't believe that the simple matter of opening the awning just didn't happen as it had done at home.

Push the knob into the 'open' position, loosen the bracing arms and use the long pole to drag the canvas down - too easy right?

Nope! - just wasn't happening. Well we're not people who give up easily so we persevered for about 10-15mins when a friendly 'caravan park local' strolled up and said "do you need a hand"?

Given he was our 'neighbour' and clearly a lot more experienced than us we said a polite 'yes please & thankyou'!

Of course to try and save a bit of face we told him we had done this a number of times before at home and that yes "this was our very first trip in this rig" - (as if he hadn't worked that one out by himself!)

Well long story short he 'fixed' it and we now had our awning open and set thanks to Glenn, our very first 'road-mate'!

THREE DOG NIGHT or THREE NIGHTS WITH A DOG?
To be honest had we not had a house full of 'stuff' to go back to, two old cars waiting to be sold and our chickens (neighbours made sure they were ok) we would have stayed even longer than the original plan.

Especially as little Chica just seemed so calm with it all. In fact she spent a lot of time on one of the reclining camp chairs while we unpacked and set everything up inside. Literally just 'chillin' watching people come and go. Looking at the huge open space at Percy's "all 110 acres of it!

Despite the first night being quite windy and all of us being woken up by the flapping awning (fixed the next day with some de-flappers bought from RTM conveniently located 5minutes away at McGraths Hill) after our second night we decided to stay an extra night - 'cos we could!

We're not sure what it was exactly but there's something about fresh country air, wide open green spaces and a sense of quiet and calm that somehow soothes the soul. Oh and not to forget a glass or two of that stuff made with grapes ?

We were still working of course (too young and too poor to retire just yet!!) and we were online 24/7 thanks to our 4G WiFi setup but the idea that you can be outside with a laptop, do your thing but still have this 'open air office' is pretty appealing!

Of course we also had some 'us time' chatting with the local/seasoned travellers and we'll talk about them more next time.

Ultimately we decided to store the van at Percy's for at least a week so we could go back and do it all over again next week  but this time armed with a lot more 'how to' knowledge and a lot less 'stuff'.