Batlow… Cold? nahhh bloody FREEZING!! We experienced an average of -2deg celsius overnight and around 8-10c during the day with a high of – wait for it... 12 degrees celsius!

Of course for those people who love the cooler climates Batlow is positively warm – well certainly the locals make if feel that way. So why Batlow?... a 4.5 – 5hr trip from Sydney of around 438Klms. Well Bob and Anne Cooper – our neighbours for the past 25+ years in Sydney invited us down for the annual Batlow Cider Fest held on the 3rd Saturday in May.

But apart from our longtime Sydney neighbours inviting us down, the Batlow locals and the actual event itself, possibly the very best moments were meeting and chatting with The String Family – Joel, Sarah, Ethan and Ashleigh.

An amazingly talented family of award winning musicians touring the country for the past 2+ years in a caravan.

Yep – 2 teenagers, mum & dad and a cache of violins, violas, cellos and more. Playing songs from the classics such as Elvis right through to the classical. 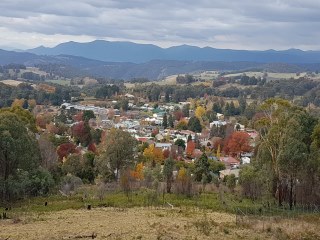 More than just their musical talents though the String Family have a story of their own which we’ll be telling soon.

Meantime we had booked in about 4 weeks early via the Batlow CiderFest website.

Wally Dormer was the main contact so a quick phone call to find out more was in order rather than just a cold – non personal email booking.

“G’day Wally… Brian’s my name – my wife and I have never been to Batlow before and as our neighbours Bob & Anne Cooper who come from there are literally ‘forcing’ us to come down, we just wanted to find out a bit more”

So – as you can see we already got a taste of the Batlow ‘close connections’ thing weeks before we even arrived.

And no – the ‘drop a name’ approach wasn’t about trying to get a discount. The special connection just confirmed that our Batlow trip was going to be rather special – and it was.

The trip down was a no-brainer – well almost! Once again we took the ‘long-way’ (thanks Google Maps!) opting for what we thought was a better/safer road, but as it happens taking the road via Tumut was the better option as we learnt later rather than via Tumblong and Adelong … Another navigation lesson learnt!

Problem was we arrived after dark but that wasn’t a problem for Wally who met us – ‘cider in hand’ at the park where we were booked to stay.

Finally - Power on – stabilisers down and we’ll sort the rest out tomorrow – after all it was starting to get a bit cool right?... Roughly 4degs c overnight… refreshing to say the least!

Check out this short video we made at Batlow with The String Family!